This is actually super random and maybe the random-est post I’ve ever done and also has not much to do with anything but, I don’t know, I just wanted to write it so bear with me and thanks for putting my with my weirdness.

So, if you read my blog you probably know by now that I absolutely adore Jenny Han’s book/series, To All The Boys I’ve Loved Before. I love love love it for a lot of reasons, but one of the reasons I was really drawn to it was because the protagonist, Lara Jean, is half Asian and half white, just like me.

As of now, To All The Boys is one of only two books I’ve ever read with a half Asian protagonist. I feel that half Asians are extremely underrepresented, and you have no idea how much I connected with Lara Jean for being biracial alone!!! (Among other things, but still!!) I have a close friend who is also “waisan” (white/Asian) and she also agrees that part of the reason she loves the book/read it is because of Lara Jean’s race!!

So you probably know that there’s going to be a movie coming out on August 17th!! I honestly CAN’T WAIT!!! I’ve seen the trailer TONS of times! I was basically watching it on repeat the day it came out. Seriously. CAN’T. WAIT!!!!!!

I noticed in the comments of the trailer a lot of people expressing their feelings on how happy they are that beautiful Asian girls are finally getting represented in movies!! And this made me SOOOO happy to see because tbh it’s about time. I’m so happy too!!! 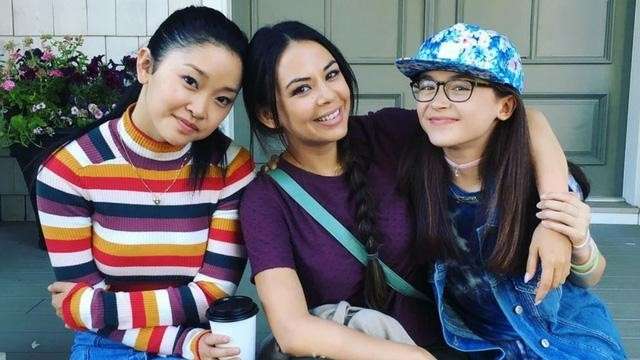 BUT ALSO I did notice that Lara Jean doesn’t look biracial. She’s being played by a Asian actress (she’s Vietnamese), and she look like that. Trust me, I know. I know several waisan people and that’s not what they look like. At this point, my biracial friend and I agreed that we’re just waiting for a **plot twist!!** Their dad isn’t their dad!!! (not really haha but the meaning stands). There’s a lot that comes with being biracial that doesn’t come with being full Asian or white. There’s looking weird and nobody knowing what the heck you’re supposed to be. (Oh, are you Latina?) There’s not fitting in because all of your white friends say you aren’t like them, can’t relate, and all your Asian friends say you aren’t like them either, can’t relate. (Oh no, you aren’t really Asian). There’s not really looking like either of your parents, and both sides of the family saying I look like a foreigner in their respective countries (She doesn’t look a thing like us!).

The thing is, I think everyone would be furious if Lara Jean was played by a full white actress. But is that really any different from her being played by a full Asian actress? Obviously I know that it’s different because Hollywood and the movie industry have such a problem with whitewashing, and POC never really get to be seen on the big screen compared to white people, but still… She’s equal parts white and Asian!

I feel like the bottom line is that I rarely get to see people who look like me in movies or popular media, or just my everyday life! And I was really hoping to see someone I related to in Lara Jean… Anyways, I’ll still watch the trailer obsessively on repeat and do the same when the movie comes out. I’m still excited that Asian actresses are getting their time to shine. But I’m still not entirely happy…

Sorry this was so long; I’ve just been thinking about it a lot and want to get it off my chest!! Let me know your thoughts on this in the comments below 🙂 Any other biracial friends? ❤ ❤ ❤