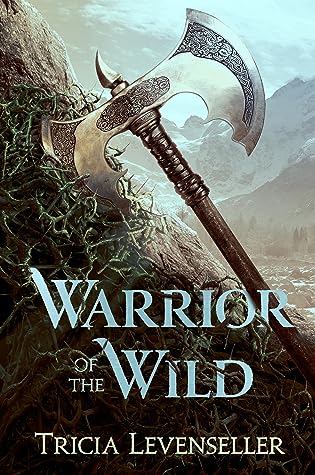 Title // Warrior of the Wild

Synopsis // How do you kill a god?

As her father’s chosen heir, eighteen-year-old Rasmira has trained her whole life to become a warrior and lead her village. But when her coming-of-age trial is sabotaged and she fails the test, her father banishes her to the monster-filled wilderness with an impossible quest: To win back her honor, she must kill the oppressive god who claims tribute from the villages each year—or die trying.

Tricia Levenseller has done it again! I adore her Daughter of the Pirate King duology, so when I saw this book by her, I knew that I had to pick it up. And after flying through it in one night I can say that it’s every bit as great as I’d hoped!

This book has a really cool viking inspired world. Right away we’re introduced to Rasmira being a fierce badass warrior throwing her axe and killing monstrous creatures! The world is full of more axe throwing warriors, as well as cool mythology with powerful and devious gods, villages that adhere to strict codes of honor forbidding them to lie and exiling those who don’t successfully complete trials, and gigantic sea monsters and birds.

Rasmira is exiled due to a sabotage in her trial and sent to live out in the wild, and as much as I’m sorry for her (yeah, being exiled has to suck, but what do you expect when you’re a YA protagonist?), I’m so glad she was because this allows the reader to move beyond their village and out into the wild! I loved seeing her and her friends interact with the various creatures and monsters they found there, trying to survive as they forage for foreign berries and build traps, try to avoid being pulled into a lake by a monstrous creature, and learn the secrets of the wild nature.

I really loved the action/adventure (? is that the way to describe?) scenes in this book with the three characters fighting their monsters so that they could come home! They were written really well so that I could really visualize them, and I was really on the edge of my metaphorical seat turning pages as quickly as possible to see what was going to happen.

Rasmira is an amazing warrior, and the future leader of her village–at least she should have been before she was exiled. It was so cool getting to see her battle and charge at creatures. At the beginning though she was a bit hotheaded and arrogant, and I saw so much character growth throughout the story as she bonded with her friends and rallied and encouraged them, and truly turned into an amazing leader.

Soren is like just the right mixture of cute silly combined with arrogant cockiness that comes with knowing all the girls love him. He’s such a fiercely devoted friend and person though, insisting on helping Rasmira out after she saves his life, and getting banished in the first place for his friend Iric so he doesn’t have to be alone.

Iric was possibly my favorite character of the story though. I loved his development from being so hard, angry, and resigned to his fate to opening up and going way outside of his comfort zone to fight for a better life for himself and his friends. He could also be so fun, purposefully teasing and trying to rile up his friend, and giving Rasmira the nickname Raz because Rasmira is too much of a mouthful. He’s also gay, and his unwavering love for his boyfriend at home was so pure.

I felt there was a really good message at the end of this book too that the characters learned. About leadership, and about finding honor as a person and not just casting people out because of some honor code they made up. I really loved that Rasmira and her friends learned at the end of it, and felt the conclusion was really satisfying.