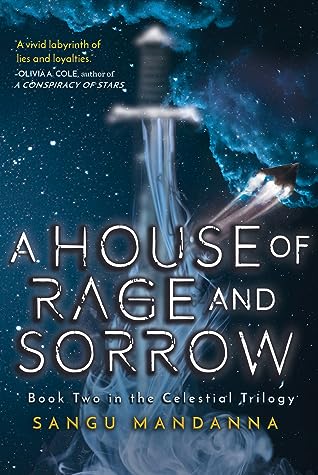 Title // A House of Rage and Sorrow

Synopsis // Esmae once wanted nothing more than to help her golden brother win the crown of Kali but that dream died with her best friend. Alexi broke her heart, and she vowed to destroy him for it. And with her sentient warship Titania beside her, how can she possibly fail?

As gods, beasts, and kingdoms choose sides, Alexi seeks out a weapon more devastating than even Titania. Past lives threaten the present. Old enemies claim their due. And Esmae cannot outrun the ghosts and the questions that haunt her. What really happened to her father? What was the third boon her mother asked of Amba? For in the shadows, lurking in wait, are secrets that will swallow her whole.

The House of Rey is at war. And the entire galaxy will bleed before the end.

Many thanks to the publisher, Sky Pony Press, for sending me a free ARC in exchange for an honest review.

So I just finished reading this book and I don’t really know what I’m supposed to do with myself right now. I think I’m still in shock, and also dying over the fact that I can’t read the next book yet because this book isn’t even out and I just… need to know what happens next… please… help

This book picks up about three months after the explosive and shocking end of the first book in the trilogy, A Spark of White Fire. It’s been a few months since I read that one, so at first I was a little confused over what was happening, but there’s actually a very helpful character guide at the beginning of the book that gives character descriptions, and so with that, after a few chapters, I was able to easily get back into the thicket of the action.

This book definitely has a darker and more somber theme than the first one. Esmae has done so much growing up from then, and the naive girl who just wanted to help her brother and go home is gone, replaced by someone who wants revenge and justice. She’s been lied, tricked, or betrayed by basically everyone she loves and trusts, and she struggles with dark, depressed thoughts throughout the novel that manifest themselves as bitterness and a thirst for revenge, as well as just withdrawing herself and shutting everyone out. This book really developed her, for good and for bad, and with the author’s great writing, I could really feel her pain through the pages of the book and just wanted to lean in a give her a hug.

Aside from just Esmae, the entire tone of the novel and the entire world felt so much darker as well, particularly since the stakes were so much higher. A war is starting, and I was holding my breath and frantically turning pages to see what would happen. People die, characters have to confront their worst fears and truths, and weapons with terrible destructive potential are teased. This book, like the last one, also played with morally grey characters and situations. No character was a saint, and they all did some pretty awful things that they justified in their own ways, and I loved seeing the complexities of the situations as characters toyed with darkness.

I adored the world that got more fully developed in this novel. This series is so unique and cool in the way it blends science fiction with fantasy in a way I absolutely adore: gods and myths flying spaceships across planets! We got to learn more about the gods and their backstories, and ancient myths that were coming alive to haunt the characters. This is also based off Indian mythology, so it was cool to read about and learn something new for me!

One thing I have mixed feelings about is that Esmae’s sentient warship, Titania, has a few chapters from her own POV in this book! I love Titania–she’s a great character who really cares about Esmae and it’s so fun and interesting to see the juxtoposition of a legendary unbeatable warship burning cities with one singing songs and getting excited to do trick shows–so I really enjoyed seeing her perspective! At the same time though, I dislike it when books add in unnecessary other POVs in sequels and subsequent books, especially since this time, most of the time it seemed to pop up just to give us exposition and info dumps, and felt kind of lazy like the author only used it because she needed to give readers information and couldn’t think of any other way.

So for most of the book, I was enjoying it. Pretty good, but not spectacular. And then I hit the last 50 pages or so and…oh man. It really hit the fan. I was shocked and glued to the book as what felt like twist after twist after twist were revealed! The ending was absolutely incredible, and the last page…ohmigosh I might die waiting for the next book!!