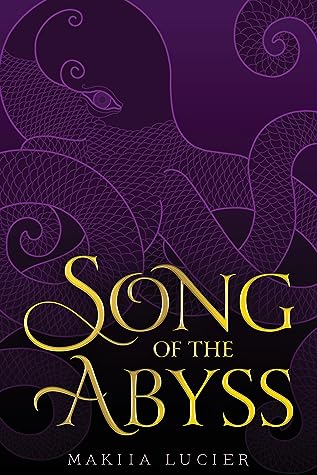 Title // Song of the Abyss

Synopsis // As the granddaughter of a famed navigator, seventeen-year-old Reyna has always lived life on her own terms, despite those who say a girl could never be an explorer for the royal house of St. John del Mar. She is determined to prove them wrong, and as she returns home after a year-long expedition, she knows her dream is within reach. No longer an apprentice, instead: Reyna, Master Explorer.

But when menacing raiders attack her ship, those dreams are pushed aside. Reyna’s escape is both desperate and dangerous, and when next she sees her ship, a mystery rises from the deep. The sailors–her captain, her countrymen–have vanished. To find them, Reyna must use every resource at her disposal . . . including placing her trust in a handsome prince from a rival kingdom.

Together they uncover a disturbing truth. The attack was no isolated incident. Troubling signs point to a shadowy kingdom in the north, and for once, the rulers of the Sea of Magdalen agree: something must be done. But can Reyna be brave enough to find a way?

Many thanks to the publisher, HMH, for giving me a free ARC at Yallwest.

It was super cool for me to read this book, because I received it at a panel at Yallwest! I went to the Royals panel, and I had the pleasure of listening to the author, Makiia Lucier, speak with other authors about writing about royals, fantasy kingdoms, etc. I loved hearing about her writing, and especially how much she enjoys maps! It was so cool to see that in this book!

Song of the Abyss is the sequel to Isle of Blood and Stone, which I read about a year ago and honestly have zero recollection of. I see that I rated it three stars, and I rated this one four stars (and have also gotten harsher in my ratings in the last year), so it’s a pretty safe bet that I enjoyed this one more, so if you read the first book and didn’t enjoy it that much, I would still recommend this one!

Also, this book can really stand alone; it’s more of a companion than I sequel, I think. It’s set eight years after the first one, and has a different main character, who was apparently just mentioned as a cameo in the first one, and the main characters from the first book (honestly all I remember are their names and nothing else from that book) have short cameos in this one, but aren’t the main characters. So if this book appeals to you and you have no recollection of the other one or don’t want to read it or anything, I still recommend diving into this one as I did.

I really loved premise of this book. It has a lot to do with maps and exploration, as the main character, Reyna, is a mapmaker, and she and the other main characters travel to a previously uncharted kingdom. Reyna is constantly taking stuff in, sketching maps and the scenery, and loves trying to figure stuff out about their world and circumstances, and I love being along for the ride!

I loved the fantasy world as well! It’s not over the top with fantasy and magic or anything, but rather presents things such as whirlpools of spirits (which is very cool) and sirens and harpies like normal. Also yes sirens!! I didn’t know there were going to be sirens in this book before going into it, and I really love sirens, so I was very happily surprised to see them in there!

I love Reyna! I love how she’s so passionate about her kingdom, her friends, her trade. It was clear that she was so invested in map making, and really fierce and strong too–I mean, the book opens up with her jumping off an attacked ship and swimming in a monster infested sea to enemy shore with classified maps… which is pretty amazing, just saying. Prince Levi was amazing too, seeing how he carefully balanced politics and diplomacy and being a good prince, with at the same time just trying to be a good friend and grieving brother, all while really liking Reyna…

Their romance, unfortunately, felt a bit like instalove and annoyed me a bit, particularly at the beginning. By the end though it really grew on me and I was totally rooting for these two! I also loved the other relationships in the book, particularly that between Reyna and her kindhearted best friend.

There were so many interesting cool characters besides just them in this book! Particularly as more is revealed about the mysterious place they travel to, and we progress farther into the book, there is a character who is so ruthless and cutthroat while pretending to be friendly on the outside, a broken character full of secrets, and a lot of other amazing people that I want to gush about but don’t want to spoil anything.

My biggest complaint with this book was, unfortunately, the pacing. The beginning of the book was great with Reyna swimming with monsters, and the second half of the book once the adventure really kicked off was fantastic, but the hundred pages or so in the middle were really boring and I was really not invested in the story then. It felt like action, then a whole lot of nothing, and then more action. But the rest of the book definitely makes the slow parts worth it!