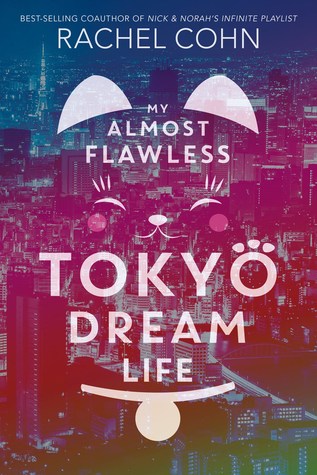 In the Land of the Rising Sun, where high culture meets high kitsch, and fashion and technology are at the forefront of the First World’s future, the foreign-born teen elite attend ICS-the International Collegiate School of Tokyo. Their accents are fluid. Their homes are ridiculously posh. Their sports games often involve a (private) plane trip to another country. They miss school because of jet lag and visa issues. When they get in trouble, they seek diplomatic immunity.

Enter foster-kid-out-of-water Elle Zoellner, who, on her sixteenth birthday discovers that her long-lost father, Kenji Takahari, is actually a Japanese hotel mogul and wants her to come live with him. Um, yes, please! Elle jets off first class from Washington D.C. to Tokyo, which seems like a dream come true. Until she meets her enigmatic father, her way-too-fab aunt, and her hyper-critical grandmother, who seems to wish Elle didn’t exist. In an effort to please her new family, Elle falls in with the Ex-Brats, a troupe of uber-cool international kids who spend money like it’s air. But when she starts to crush on a boy named Ryuu, who’s frozen out by the Brats and despised by her new family, her already tenuous living situation just might implode.

My Almost Flawless Tokyo Dream Life is about learning what it is to be a family, and finding the inner strength to be yourself, even in the most extreme circumstances.

This cover is basically the cutest thing ever. And I had such high hopes for this one! It’s really a shame that I was so let down. The premise of this is really cute! It’s a Cinderella-esque rags to riches story, about a poor girl in foster care being whisked away to live with her previously unknown fabulously wealthy Japanese dad in Tokyo! I’ve read so many books with a similar premise, but never before in Asia, so I was really excited for this book!

Alas…this really didn’t feel so much like a novel as it felt like a travel guide for Japan. We got descriptions of the locations, the food, the clothes, the traditions…basically everything. And that would normally be a great thing! I really did enjoy reading about all of that, since I’m all about that Asian rep! BUT, what I would really like to see is to really experience all of this, instead of having is straightforward narrated. This really felt like one of those classic “show not tell” worksheets we all got in third grade, but this was told instead of shown and I kind of felt like I was reading a Wikipedia article about Japan, not really living it through Elle, the main character. Maybe this will appeal more to people who aren’t familiar with Asian/Japanese culture, because you really get to learn about it, but since I already knew most of what Elle was discovering, it was all very boring and annoying and I was like skip skip skip.

With that said, of course the Asian rep was really nice to see! Elle is mixed race, half Japanese, and half ambiguous white/black/native American, and since I’m also half Asian this rep is so hard to find and this made me really happy! Of course, this story takes place in Japan, so there are many other Asian characters, and another half Asian main character as well! I loved seeing Japan represented and displayed! There were a few minor things that seemed off to me, such as the pronunciation of names, but for the most part, it was very clear that the author (who is not Asian) really did her research!

Unfortunately, speaking of rep, there was one mention of lgbtq+ rep that I didn’t really like. At one point, Elle sees a text on a woman’s phone from another woman who is probably her girlfriend/lover/whatever, and Elle is immediately like: Wow she’s lesbian I guess that’s why she divorced her husband! And I was like…um…literally why would you jump to that conclusion bisexual people exist too just because she likes women doesn’t mean she doesn’t like men and didn’t love her ex-husband at some time…

Beyond just this, I didn’t really like Elle as a character. She was in foster care, which is a situation I obviously have no experience with, and I don’t want to come across as privileged here, but Elle struck me as really whiny and annoying, and judgmental. She meets a woman, who went to Harvard but is not working as a secretary, and her immediate thought is: wow I guess she wasn’t very smart. When she learns that Japanese people take their shoes off indoors, she goes like: that’s weird what do they have against shoes. It felt like she was constantly judging Japanese customs, and just people in general, so I never really warmed up to her.

Her thoughts, and basically the entire book also felt very juvenile. Elle is sixteen, and a junior in high school, but she felt much younger, like a freshman or a middle schooler or something. I kind of have no patience for people who talk like “my fav” and “yessss” and “OMG WTF.” I mean, yeah that’s text language and I text that to people, but can anyone take a book seriously that has people talking with multiple s’s in yes?

However, the book had some content that felt pretty mature: there was a lot of swearing, and there was attempted date rape, as well as mentions of a guy getting a girl pregnant when she was too drunk to remember. I feel like the content itself is more upper YA, high school at least, but the writing style was more lower YA, like middle school, and overall it really didn’t match, and as someone who tends to read more upper YA I was pretty frustrated by the irritating juvenile tone.

Besides just Elle, all of the characters felt very flat and to be honest I didn’t really like any of them. The ex-brats just felt like steryotypical mean girls from a high school movie or something, like the plastics, and not like the way actual people act. Basically all of the guys were douchbags. I couldn’t care less about Elle’s love interest and felt zero chemistry between them and honestly the romance was probably the weakest part of the book.

I didn’t really like the ending of the book. There were some issues left unsolved that I felt really needed to be resolved, but were kind of just forgotten about. In addition, some of the changes that did happen, the sort of people becoming better people felt rushed and unrealistic given everything else we learned about their characters throughout the book. Overall, this book had such a great premise and such a kawaii cover, but I definitely won’t be recommending.