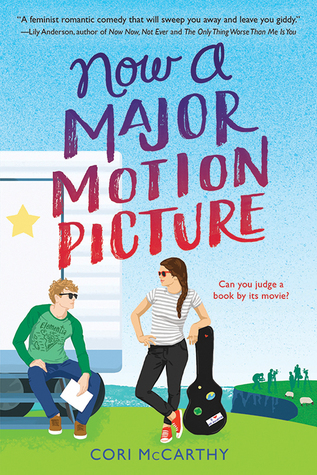 Unlike the rest of the world, Iris doesn’t care about the famous high-fantasy Elementia books written by M. E. Thorne. So it’s just a little annoying that M. E. Thorne is her grandmother—and that Iris has to deal with the trilogy’s crazy fans.

When Iris gets dropped in Ireland for the movie adaptation, she sees her opportunity: if she can shut down production, the Elementia craze won’t grow any bigger, and she can finally have a normal life. Not even the rascally-cute actor Eamon O’Brien can get in her way.

But the crew’s passion is contagious, and as Iris begins to find herself in the very world she has avoided her whole life, she realizes that this movie might just be amazing…

This book has been likened to Fangirl, which is one of my all time favorites!! It also shares many similarities to Geekerella, in my opinion, another book I just adore!! But this book… I do not adore. And here’s why.

The main character, Iris, is the most spoiled, irritating, egotistical, whiny, bratty character I’ve ever met. (Well maybe not THE worst @Anna from Anna and the French Kiss, but definitely close!) Since she’s a whole lot of pain, I’ve decided to list all the irritating things she does in handy dandy list form for you!!

Despite all her flaws, Iris is still somehow superhuman!! She’s incredible!! Here are some of her unrealistic accomplishments.

So if this doesn’t irritate the heck out of you, I don’t know what will. But fear not! I’ve come up with another list of annoying things about this book!!!

Anyways, at this point you may be wondering why this isn’t a one star. And that’s because there are some amazing messages about sexism, racism, and homophobia! The female movie director talks about how hard it is for her to be taken seriously as a female, and we have a couple of Filipino movie stars talking about how hard it is to land a role as a POC (especially as a biracial–too light for some roles, too dark for others). We also have a queer actress talking about how hard it is to land roles in Hollywood because of her sexuality. I feel like there were some amazing messages here!! Honestly, with these messages, the book had potential to be really great. It’s just too bad that Jaded Iris had to come along and ruin it.

14 thoughts on “Now A Major Motion Picture (Rant) Review: An Irritating Character In A Ridiculous Mess”