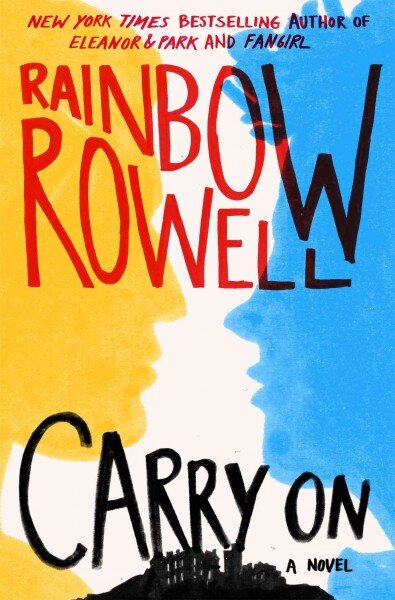 Goodreads Summary: Simon Snow is the worst Chosen One who’s ever been chosen.

That’s what his roommate, Baz, says. And Baz might be evil and a vampire and a complete git, but he’s probably right.

Half the time, Simon can’t even make his wand work, and the other half, he starts something on fire. His mentor’s avoiding him, his girlfriend broke up with him, and there’s a magic-eating monster running around, wearing Simon’s face. Baz would be having a field day with all this, if he were here — it’s their last year at the Watford School of Magicks, and Simon’s infuriating nemesis didn’t even bother to show up.

“You have to pretend you get an endgame. You have to carry on like you will; otherwise, you can’t carry on at all.”

Being the Chosen One can’t be as easy as people make it out to be–especially when you have more power than you can control, making things randomly blow up, and when the nemesis of the World of Mages, the Humdrum, seems to be targeting you.

Simon Snow is returning to his final year at Watford School of Magicks in the middle of a war. Old, powerful families such as the Pitches, including his awful roommate, want to take down his mentor, the Mage. Said awful roommate, Baz Pitch, hasn’t even shown up and is probably plotting Simon’s demise around every corner. The Insidious Humdrum is creating holes and dead spots of magick all over the world. And Simon, The Chosen One, is caught up in the middle of it all.

Carry On is Rowell’s take on “The Chosen One” story, but is really more like her take on Harry Potter. The similarities jumped right out at me from the first page, and I could pretty much equate every character to a character from Harry Potter. Because they were so similar, I was constantly comparing the books, and finding ways where this one failed to measure up to Harry Potter. I probably would have enjoyed this book more just thinking of it by itself, but with such similar story lines, that was impossible for me.

Upon getting further into the story, the differences between the two grew, and Carry On became a story of its own. My favorite part of the book was definitely the intense and unexpected ending, which I loved! There also appeared to be many different things/story lines going on throughout the book, which didn’t relate that much, but they all came together at the end, which was amazing!

I loved the characters! We are given initial impressions of them that may be very different from who they turned out to be. It became clear that there was no one “good” versus “evil” side, and upon looking at things from multiple points of view, my own thoughts on someone/something changed!

While looking at things from many points of view is good, this book had just too many. It is told in first person POV from many people, changing at random times, even in the middle of a chapter! The two primary ones, Simon Snow and Baz Pitch, I loved. However, there were random other ones from minor characters, some of which only had one short chapter for their POV, that felt random and necessary. I also sometimes had a hard time remembering who was speaking; their voices were very similar, especially the minor characters who only had one or two chapters (or parts of chapters), which is not enough time to develop a voice. I think this book would have worked better with only Simon and Baz, or being told in third person/omniscient.

My favorite character was probably Baz, who is so much more complex than he originally seems! I also really loved Penny, Simon’s best friend who was always planned and ready! And then Simon himself is fun and wonderful to read about. I loved the romance in this book! It was fairly minimal, to not take away from the main plot of this war, but was still swoon worthy and super cute!

Check out Carry On on Goodreads, Amazon, and Barnes and Noble.

10 thoughts on “Carry On by Rainbow Rowell: Review”